This author has not yet filled in any details.
So far Paul Riddell has created 90 blog entries.

The Scottish Fishermen’s Federation and the National Federation of Fishermen’s Organisations, which together represent the UK fishing industry, held talks with senior UK politicians today calling on them to hold firm on the commitments made to fishermen and coastal communities ahead of the 15th October Brexit negotiations deadline. Elspeth Macdonald, Chief Executive of the Scottish [...]

Text of letter sent today to UK's lead Brexit negotiator Dear Lord Frost UK/EU Future Relationship – Fisheries Negotiations As you know, the Scottish Fishermen’s Federation has welcomed greatly the repeated assurances you and the UK government has given on securing the right outcomes for fishing through the Future Relationship negotiations. We have also greatly [...]

Joint statement from SFF and NFFO on Brexit negotiations

Elspeth Macdonald and Barrie Deas, chief executives of the Scottish Fishermen’s Federation (SFF) and National Federation of Fishermen’s Organisations (NFFO) respectively, said: “For the fishing industry in the UK, leaving the Common Fisheries Policy has always been about redressing a fundamental issue: the woefully unfair allocation of quota shares in our waters, where the EU fleet has an unfettered right of [...]

Government, the national fishing federations and the Fishermen’s Mission share a commitment to the whole fishing industry. This means not only the fishing businesses that make up the sector, but the crews who work on the vessels as owner/operators, self-employed share-fishermen, or fishermen under employment contracts. Financial support measures from governments across the UK have been significant in scale and delivered with a rapidity and efficiency that has matched the urgency [...]

The latest version of the FishSAFE unit, the essential safety information tool for fishermen working near offshore oil and gas infrastructure in the UK Continental Shelf, is now available. FishSAFE Mk3 includes major improvements such as a high-resolution touch screen and trackball option. FishSAFE updates its internal hazards database automatically from the internet and there [...]

Scottish fisheries leaders today re-iterated the industry’s demands as talks resumed over a Brexit deal. SFF chief executive Elspeth MacDonald said the UK’s departure from the EU and its Common Fisheries Policy would allow the UK to become an independent coastal state and to control access to its fishing waters. This is already what the [...]

Reacting to what is understood to be a boycott of imported fish, including from Scotland, among some large French retailers at the behest of a small section of the country's fleet, Elspeth Macdonald, chief executive of the Scottish Fishermen’s Federation, said: “This is deeply regrettable at a time when markets have been devastated due to [...]

The Scottish Fishermen’s Federation welcomed the funding package for smaller vessels as a good first step to support the industry. SFF chief executive Elspeth Macdonald said: “The markets that these boats sold into have largely disappeared due to the Covid-19 pandemic, depriving many fishermen of their livelihoods almost overnight. “The Scottish Government’s announcement of this initial financial [...]

Industry will keep up pressure over key Brexit goals

Scottish fishermen’s leaders will maintain pressure on ministers to secure the industry’s top priority of control over access to UK waters as the Brexit trade talks proceed. They will continue to urge the government to stick to its plan to make decisions on who gets to catch what, where and when around our shores from 2021 and [...]

Failure by the government to gain full control of access to UK waters in the next phase of Brexit negotiations would be a “colossal betrayal” of the fishing industry. That was the uncompromising message delivered today by the Scottish Fishermen’s Federation prior to the UK’s formal exit from the EU on Friday. SFF chief executive [...] 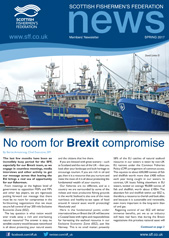